I sure would like to be able to link my Livejournal and Tumblr accounts. It's easy to link Instagram, Facebook, Twitter, and some others I don't use (to tumblr) but LJ always seems a bit more difficult. I guess LJ is supposed to be used differently, but I'd like some of my tumblr content to come over here automagically.

Livejournal is a little harder to use than the others--it just hasn't kept up with the way people use the internet, I guess. I will still use LJ because it feels more permanent (and is way easier to search than the others) but less frequently I guess.

Anyway, due to my dad's health issues (vertigo--this is apparently a thing) I was in four states in 6 hours yesterday.

Also this morning I posted this on Tumblr:

I was showing the curators a dead dove (window strike), carrying it around, absent-mindedly resting my finger in its mouth, in its crop. Miraculously, it came back to life!

Note to self: don’t try this outside of dreamland.

The last few weekends I've been visiting my dad out in the Western part of New England. This past weekend we walked in the rain at the Fannie Stebbins Wildlife Reserve in Longmeadow Massachusetts.
( Collapse )

If you visited New England 200 years ago, you'd see rabbits dashing from thicket to bramble, surviving in the transitional areas, places where Native Americans or colonists, or wildfire, had cleared the land and new thorny growth was rebounding. This was the New England cottontail Sylvilagus transitionalis* and about a hundred years ago it began to become rather scarce.

At about that time, a related rabbit found just west of the area, in more open habitats, was introduced. The interloper was the eastern cottontail S. floradanus**, a rabbit with a range from the central states and Canada all the way to the north of South America. Besides New England, the eastern was introduced to the west coast, the Caribbean, and even Europe. Its larger eyes spot predators from across open areas, making it better adapted to the kind of habitat that dominates much of New England: wooded suburbs.

It's sometimes hard to believe that Canada geese Branta canadensis were, for a time, rare--endangered. Now they are common to the point of being considered a nuisance. Historically they are migrants, breeding far north of New England and migrating to the southern states in winter. Reintroductions of captive birds and changes to the landscapes--including year-round urban feeding--have resulted in a population that migrates shorter distances, or not at all. 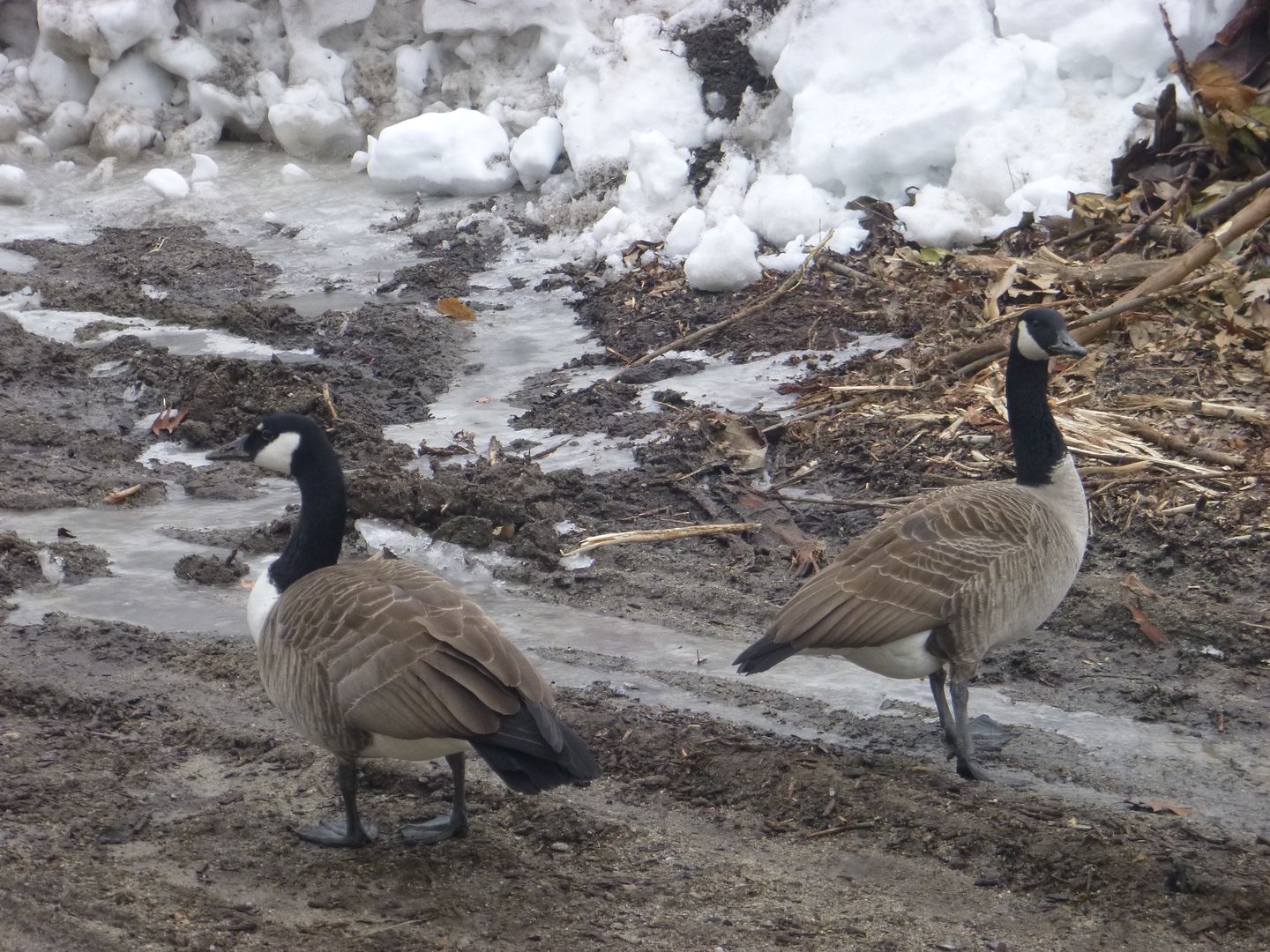 In recent decades Canada geese have taken to breeding in New England. They are ecologically an alien invasive in our habitat, but enjoy the protections that all native bird species do. Many facilities and municipalities get special permits to disrupt goose breeding to keep populations down.

Another one of those typically beautiful New England winter scenes.

So as I was on my 2 mile walk, I passed this dam on Mother Brook. Mother Brook, as I may have blogged before, was the first man-made canal in New England. It was cut between the Charles and Neponset Rivers, for the purpose of making waterfalls like this one to turn waterwheels.

The wheels and mills are gone, but the dams remain. 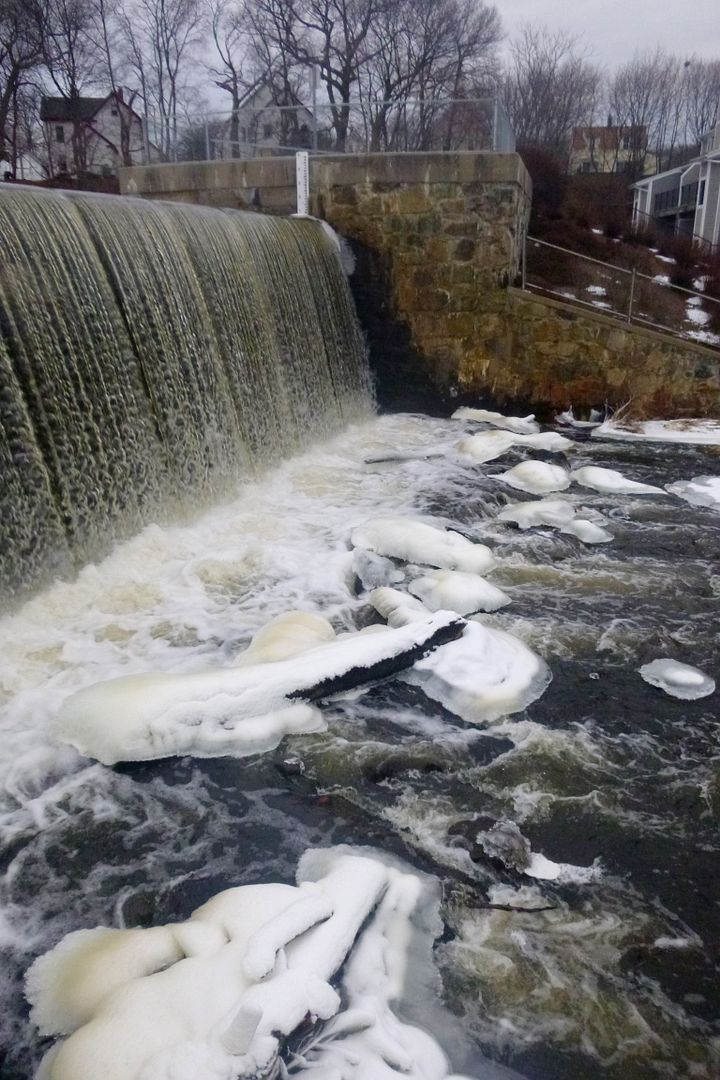 The partially ruined beauty of the human hand on the New England landscape.

In April Urban Nature Walk went to Ponkapoag Pond. Some folks stayed for four or five hours, finally making it to the bog. Alas, I had to leave after 2 hours. Friends of mine (locals I call the "nature friends") found out I'd never been to the bog and were horrified. Finally enough things came together and I planned for the July walk to approach Ponkapoag from the opposite side so we would get to the bog quicker. Even before we got to the bog, it was a very different walk than the one we took in April. For one thing: mushrooms!

These little teeny guys were right by the trailhead (which is right off of rt 93). They look very similar to mushrooms we've seen at Cutler Park--we haven't identified them to species, but Alexis named them "Spaghettio mushrooms."

Here we are, your 2014 Zoo Crew! This is the largest group we've assembled for a 25 mile ride yet. Ours was also the team that raised the most money for the scholarship (thanks in no small measure to you wonderful people).

I picked up a big piece of Dedham granite with the intention of hurling it at the center of a section of yew wood, in order to break it into firewood size. I noticed a moist worm under the rock, then paused realizing that the worm was actually two salamanders.

Despite the color difference between these, they are the same species, Plethodon cinereus, the "red-backed salamander." The one here that is not red-backed might be called a lead-backed salamander, as in the color of lead, the metal. Growing up in western New England, turning over rocks and logs I saw hundreds of redbacks, but I can't remember seeing the lead-backed phase. I discussed this with some of last week's Urban Nature Walk participants, and consensus seemed to be that lead-backs are more common in eastern New England.

Throughout New England, and much of North America, this species is far and away the most numerous of the tailed amphibians, particularly in those ecosystems affected by human impacts. These small lungless creatures are predators of tiny invertebrates. They survive by keeping moist and allowing oxygen to dissolve directly into their bodies through their skin.

My friends got a house and invited people over to warm it!
( Collapse )
Collapse