Since I'm referring to this ant as an invader to North America, I'm choosing to use the common name suggested by the University of Maine. There they study this insect, which is simply referred to as the common red ant over in Europe--even its scientific name translates to that. Scientists in Maine suppose that these creatures have become established in Quebec and New England by way of unintentional importation. A breeding fragment of a colony can easily stow away in the roots of a tree, wrapped in burlap and shipped from a nursery across the Atlantic. The worry now is that further transport of potted plants, mulch, and other materials will spread the ant to other areas. Ant colonies generally develop individuals which have wings and can breed, but so far the European fire ant has not been observed to do so in North America.

Why all the concern? Besides the fact that they may displace native ant species and prey on other native animals, these ants--to repeat the phrase that a coworker used when first reporting the ant to me--"sting like a bastard." The "fire" part of the name is not just their color, but the burning sensation you feel when these aggressive insects decide to defend their colony. Taking these pictures I got off easy--a single sting on the tricep that felt like I was whacked with nettles. A landscaper who received many stings described the experience as "much worse than yellow jackets." Apparently the effect of the sting varies in intensity depending on individual sensitivity and amount of venom injected.

I have an email alert for news and blog postings about the species, in the hopes that an effective control method will be developed and reported upon. The vast majority of emails are blog posts by enthusiasts who keep this species in captive colonies. Often they are video posts, sometimes they are husbandry discussions on bulletin boards, but a disturbing amount of them are posts about people selling and trading ant colonies. It would not surprise me if this species became a problem far from the east coast through an accidental release, or a discarded colony. The other category of news information about Myrmica rubra is the publication of research articles about them. They are a frequent subject, not as an invasive pest usually, but because of the fascinating interactions they have with other native European insects. There are several species, most famously a small blue butterfly, that use chemical disguises to produce young within the ant colony itself. The ants will rear caterpillars as they would their own larvae, stupified by the pheromone signals emitted by the invading insect.

I should hasten to add that there is no relation between this ant and the much more famous "Red Imported Fire Ant" Solenopsis invicta, which is native to South America. The European fire ant has some ecological advantages when compared to the RIFA. M. rubra is more tolerant of cold temperatures, clearly. The European ant also creates multi-queen colonies, with fertile females sometimes numbering in the hundreds in the largest supercolonies. Sister queens living alongside one another isn't unheard of among ants, but in M. rubra these many queens may not even be related to one another. The potential for population density is conceivably limited only by food and shelter resources.

The European fire ant is a generalized scavenger, feeding on nearly anything edible, including high energy plant-based foods, live animal prey, and aphid honeydew. This presents a challenge for bait-based pest control; while the ants readily take insecticide baits, they have many other food sources to choose from and will not be wiped out by a single bait application. A very low concentration of boric acid (a relatively safe and environmentally friendly insecticide) must be used to avoid killing the workers before they have a chance to feed the brood. Baits designed for Red Imported Fire Ants seem to be somewhat effective, too. Broad insecticide spray treatments have been shown to be ineffective, as the bulk of the colony is cryptic, and will rebound from the survivors. The surface of the colony is easy to find: under rocks, amid the roots of shrubs and trees, and in mulch and other debris. Typical habitat in North America includes most outdoor man-made landscapes: gardens, lawns, landscaping edges, and so on.

Global Invasive Species Database. Most of the information here is taken from the New Zealand site above. Good launching point to find other invaders.

UMaine, again. This link includes a form to send with your collected ant sample to see if it is the EFA. 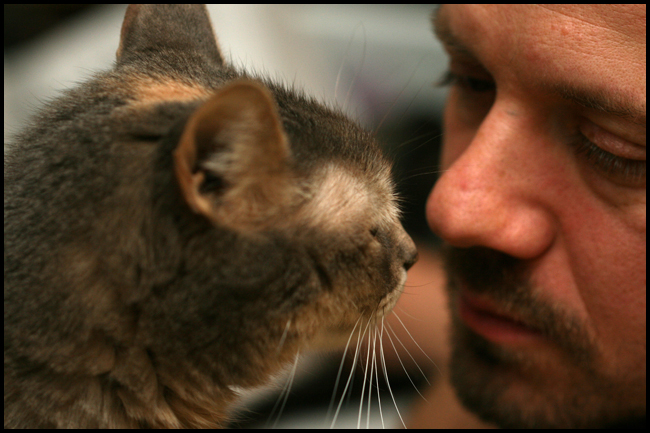 I worry sometimes that I will be taken as a dog person who dislikes cats. On the contrary, I like cats a lot, probably as much as I like centipedes. This photo of Mollie and I is by

cottonmanifesto, whose talent is available at a ridiculously reasonable price to photograph your portrait, pet's portrait, or event.

Following TweetsofOld is a good way to keep up on urban nature news (and news from the farms, one supposes) from a hundred years ago or so:

Mrs. Hall,84, was bitten on the thumb by a rattlesnake. Her arm was corded, then held in a pan of kerosene until Dr. Moorer arrived. AL1927

Lightning struck a large hickory tree 20 rods from J.K. Patch's, shivering it into pieces and splitting a large rock. MA1875

A Cyclone from the Dragoon Mtns visited Tombstone at sundown. 100 head of steers were scattered in all directions. AZ1889

When the hailstorm ended, four of Peter Lamb's 235 fowls had been knocked cuckoo. MT1930

At the old bachelor's house were observed innumerable and very large cock roaches, one of which filled a thread box. IA1898

Wild, stray goats have been numerous in the vicinity of 119th street and 5th avenue. NYC1882

Albert Dennis was bitten by a water-moccasin, which he drew up in a bucket of water from a well. TX1893

E. B. Kornforth lost control of his auto and met with a pear tree. He told police thought he was being attacked by a bat. MI1916

A boy was bitten by a snake at Staffords' on Tuesday while reaching his hand under the house for a marble. KS1881

The Italians and French of Barry County can be seen picking the hedge leaves for their silk worms. MO1890

Scald your possum as you scald a pig. Scrape off all the hair. Some prefer shaving it with a razor. KY1909

Denver is providing a fine of 10 cents for every dandelion allowed to bloom within the city limits. CO1909
Collapse