Sometimes I wish that I believed something that could be easily expressed in three small words printed large on an ugly paper sign: Abortion kills Children. Meat is Murder. God Hates Fags. Taxes are Bad.

But I'm an adult, with complex and nuanced beliefs informed by years of experience and the power of reason.

Grow up you stupid children. Black and white beliefs are for fairy tales.

My neighbors drew this wonderful art on the sidewalk on our block. It's one of my favorite stories from the Old Testament, I guess because it involves animals. The short of it is that the Creator feels the need to start fresh, and gets one human and his family to round up representatives of all the animals onto a giant boat. Then the Creator kills his creation with a massive storm and flood that lasts more than a month. The 40 days and 40 nights on the floating zoo must have been a terrible ordeal. The Creator thought ahead to order Noah to bring more of the animals that were considered clean for eating--have to feed those big cats something!

When it was all over, the Creator produces a gorgeous multicolored band of light across the sky--a rainbow--and declares that it is his sign that the deluge is over, and that it will appear again when ever it rains, as a symbol of the agreement not to destroy the world again.

(Probably this story came up because of all the flooding that happened last week!) 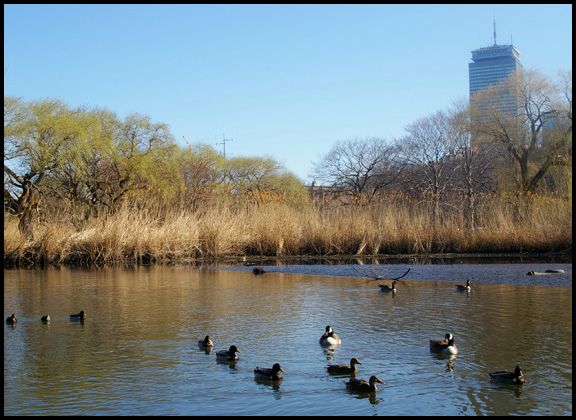 It was an uncommonly nice first day of spring (probably one of the 10 best days of the year) so I took Charlie on a longer walk than usual. This is our old friend The Muddy River, another mile or two downstream than you usually see it on my journal.

To be honest, I'm just posting this stuff so I don't have to remember where I'm keeping it anymore. My neurosis is your gain.

For example:
This is a fantastic lecture on endangered species given by the late great Douglas Adams. At least the first 45 minutes is fantastic, I haven't finished watching it. So far he's covered aye-ayes on Madagascar, the preparations for getting to Komodo (don't get bit), and the sad mating habits of New Zealand's Kakapo. I haven't read "Last Chance to See" or seen the documentary based on it, but this makes me want to.

Speaking of fungi, here's another house sprouting mushrooms. It's in Australia, and the mushroom doesn't look like a species I recognize. Nice orange mycelium there.

And then, two pictures that have nothing to do with anything but I like them: This is a cartoon from Punch. (click to see bigger) Edgar Wright, Nick Frost, and Simon Pegg. I'm following the latter two gentlemen on Twitter these days. HI-larious.
Nick Sample: "I can't get this taste of chimp urine out of my mouth."
Simon Sample: "I am furious! Was really looking forward to watching Lost but my WiFi was being a fuckplank so my Apple TV wouldn't stream it and shitballs!"