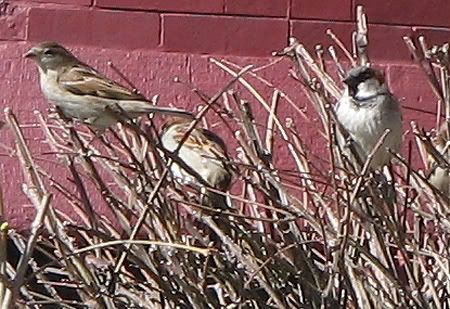 The house sparrow has probably been an urban bird longer than any other. It is now the most widely distributed songbird, found nearly world-wide (including isolated spots like the Galapagos, and Easter Island). The house sparrow has begun to speciate, and each region of the world where it occurs has a house sparrow that is very slightly different from the others, but distinct.

This bird, like the pigeon, had the good fortune to be native to the area where agriculture was invented, in Northern Africa. This bold granivorous bird found that its bipedal primate neighbors were growing seed-producing grasses and weeds in massive amounts. The house sparrow began an association that has continued for thousands of years. As grain-growing humans spread, the sparrow followed. Surpluses in grain made it possible for huge numbers of people to settle together, in cities. Though we don't think about it much today, until the last 100 years,cities ran on horse and ox power. Horses and oxen run on grain, and so the house sparrow was happy to adapt to an urban lifestyle.

When they reached the British Isles, the bird acquired the name "English sparrow," and bore some of that people's national pride. For this reason, as well as the misguided belief that sparrows help control crop pests (they do eat some pest invertebrates--insect larvae--during the nesting season, but they are more likely to feed on the crops themselves) these birds were brought to the many places that the English colonized. Passer domesticus, with several thousand years of practice existing in a human-altered ecosystem, now outcompete native birds in and around cities on six of seven continents. They still favor grain, but have adapted to survive on nearly any edible scraps available.

House sparrows are not closely related to North American sparrows, but are in a group called African weaver finches. These birds weave elaborate oriole-like nests, but house sparrows gave that up for simple tree, ledge, or cavity nests. They can nest nearly anywhere that provides a bit of shelter. Electric signs, air conditioners, heating vents, abandoned buildings, and all manner of urban nooks can suit them. They have been known to evict other birds from nest holes, killing the eggs or nestlings therein.

House sparrows will make use of bird feeders, and if allowed to, will dominate them, preventing other birds from feeding. They have been observed picking insects from the grills of vehicles at truck stops, and entering food stores to sample spills in the aisles. Pest control companies and poultry farmers are kept busy devising sparrow-exclusion techniques. But since the mid 1800's, the genie has been out of the bottle: house sparrows will probably be an urban species for as long as there will be cities.